Is exercise a waste of time?

As an authority on fitness, I always get asked my opinion on what’s the “best” exercise to shed fat.  I often bite my tongue when posed these kinds of questions as the answer is invariably, it depends.  It depends on your current fitness level, past medical history, future goals, level of commitment, realistic energy/time allowance to the program…and the list goes on.  I also get asked about what the ideal fat loss diet is, and once again my response is invariably…you guessed it…it depends.

It’s interesting, I always get asked about exercise and diet when it comes to weight management.  But there’s one other key piece to the fat loss puzzle that is often left out of the equation.  And this is often where I direct people who tell me, “I’m working out now and I’m eating better…why am I still not losing fat?”.

What is that puzzle piece?

So what is NEAT?

Simply put, if you want to lose weight, you need to burn more calories than you take in – termed negative energy balance.  Enter low-calorie diets and calorie-burning exercise.  However, when it comes specifically to how many calories you’re burning in a given day, exercise is a relatively small player.

There are three main components to daily energy expenditure: i) basal metabolic rate, the energy needed for basic metabolic processes to occur, ii) thermal effect of food, the energy it takes to break down, absorb, and store food/fuel, and iii) activity thermogenesis, which consists of exercise and NEAT. 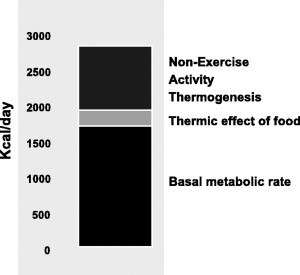 With respect to activity thermogenesis, we explore exercise and NEAT.  The average “exerciser” exercises about 2 hours per week, which equates to burning less than 100 calories per day.  This is not much when you consider that the average calorie intake can be anywhere from 1500-2500 calories a day, and someone trying to lose weight needs to have a negative energy balance.  And what about those individuals who spend no time exercising…their exercise thermogenesis is zero.

Dr James A Levine, MD, PhD, whose extensive research has provided the basis of what I am sharing here, describes NEAT in the following fashion:

“Non-exercise activity thermogenesis is the energy expenditure of all physical activities other than volitional sporting-like exercise. NEAT includes all those activities that render us vibrant, unique and independent beings such as dancing, going to work or school, shovelling snow, playing the guitar, swimming or walking in the modern Mall. NEAT is expended every day and can most easily be classiﬁed as NEAT associated with occupation and NEAT associated with leisure.”

NEAT is contrasted to exercise in that exercise is a volitional act, engaged for the purpose of developing or maintaining physical fitness.  According to Dr Levine, occupation is the greatest determinant of NEAT, to the point where a labour-intensive job can lead to an increase expenditure of 1500 calories per day! 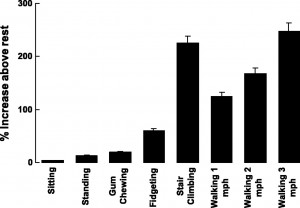 Ok, so how does NEAT play a role in weight management?

When we look at the readily modifiable components of energy expenditure, namely exercise and NEAT, and consider the relatively small impact of exercise, it is of great importance that we maximize NEAT.

So NEAT helps with fat loss and weight management…what about other health benefits?

We all know that regular exercise is a key component to overall health.  However, some great new research has come out of Japan demonstrating that NEAT plays a role in the amelioration of insulin sensitivity, waist circumference, high-density lipoprotein cholesterol, and blood pressure in patients with type 2 diabetes.

We all know that exercise is not a waste of time…it has a laundry list of benefits associated with it.  However, health and wellness extend beyond sweating it out at the gym a couple of times per week.

To promote overall healthy body composition, and even reverse obesity, Dr Levine’s research recommends that individuals stand and/or are ambulatory for 2.5 hours daily.  It is also recommended that we re-engineer our work, school, and home environments to make active living the option of choice (I wholeheartedly agree).

…in other words, move on a daily basis.

Subscribe for current, relevant, and valuable wellness info to keep you happy and healthy!